Trending
Written by John Charles Robbins on May 3, 2022 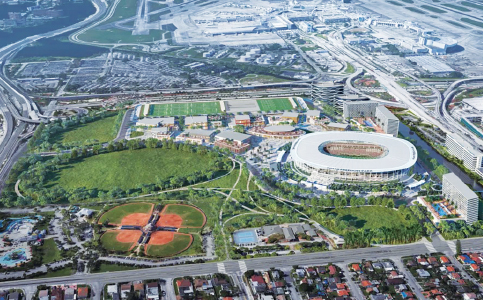 A more than eight-year quest to establish a Major League Soccer team in the city of Miami culminated in a historic vote on April 28, approving a 99-year lease on city property to David Beckham and his partners.

What is now Melreese Golf Course next to Miami International Airport will be transformed into Miami Freedom Park, with promises of billions in revenue and hundreds of new jobs.

The owners of Inter Miami CF plan to remediate the contaminated site and turn it into a professional football stadium, sports park and commercial development.

Mr Beckham’s business partners, Jorge and Jose Mas, appeared before the commission during the more than five-hour special meeting and spoke proudly about the economic impact the development is expected to bring.

Jorge Mas said: “This is a legacy project for our family. The opportunity to build something like this only comes once in a lifetime. And we have to do it the right way.

Miami Mayor Francis Suarez, a longtime supporter of the project, said over the 99-year lease it will generate more than $2.3 billion in revenue.

“This deal will create the most paid-for-life jobs in the history of the City of Miami,” Suarez said, and he said you can thank Commissioner Ken Russell for working to make enter the living wage requirement into the 2018 referendum.

Jorge Mas said the project will create 15,000 direct and indirect jobs, 2,000 permanent jobs at Miami Freedom Park, and generate $40 million a year in property tax revenue for the city, county, and school district.

“The construction of this stadium and this development will not cost a penny of taxpayers’ money – not a penny,” Mas said.

“This is a phenomenal deal for the City of Miami. I urge you to pass this article…it’s a Miami miracle. Let’s do what it takes. Let’s do what the owners of this property asked” , said Mayor Suarez.

The company has agreed to donate $25 million for park improvements and for the Miami River and Biscayne Bay boardwalk.
At the 11th hour, the company agreed to:

■Assume the costs of maintaining the roads, lights, sidewalks of the new 58-acre park that he will pay to have built.

Mr Mas said: “Everything I talked about is in the deal. There is no public subsidy. Tax revenue and new jobs have significant economic benefits…and I have to deliver the public benefits first. There is no commercial development before the stadium.

He added: “We are going to create the biggest park in the city. This is extremely important…we will open the doors of this property to all the public to share family experiences.

City commission rooms were packed for the special meeting with standing room only.

During the public comments, several people spoke out both for and against the project.

Supporters touted the main economic benefit with new money and jobs, and the feather in the hat of having a professional football team based in the city.

Opponents said it was a mistake to turn over public property to a private developer and a mistake to abandon the city’s only public golf course. Others objected to the non-bid deal and some complained of further worsening the traffic situation around the airport.

A four-fifths vote was required for approval.

He came up with a 4 to 1 vote at the end of the special meeting. Commissioner Manolo Reyes was the only one not to vote.

Commissioner Joe Carollo had methodically presented a compromise to the original proposed deal that would bring the city higher rental income and other guarantees.

What seemed to be mostly a cooperative and collaborative meeting turned late into a shouting match between Commissioners Russell and Alex Diaz de la Portilla.

The meeting resumed around 8:40 p.m. and Mr Russell addressed the room, apologizing for his outburst but saying he was very passionate about the issue.

One of the things Mr Russell was pushing for in a final deal was to ensure that no net loss of city parks – a requirement of the city charter – is met.

The Melreese property is approximately 131 acres and is considered parkland.

A last-minute addition to the deal directs the Mas brothers and Mr. Beckham to immediately enter into talks with the University of Miami to join the stadium project, so the venue can host the United States soccer team. College Hurricanes, if a deal can be reached. worked in 90 days.

Mr. Carollo, as he began to detail his suggestions for changes to the proposed agreement, said: “This is the largest contract this body has negotiated in our history.

Mr. Carollo thanked the mayor, city manager and city attorney for spending hours working with his staff to develop a final settlement proposal.
“I appreciate the work you’ve done,” he said.

“Ultimately, this deal was sweetened by hundreds of millions of dollars,” Mr. Carollo said.

Mr Russell said: “It is not a political decision at this stage. Our job is to ensure that the transaction is as good as it should be for our residents.

Mr. Mas said: “My wish is to move forward very quickly on this project.