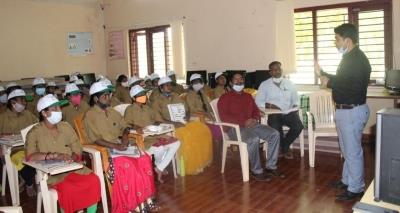 Haveri (Karnataka), Jan 18 (IANS/ 101Reporters) “I have a master’s degree and was working as a guest lecturer when the COVID-19 pandemic hit us so unexpectedly. I would never have imagined becoming a driver for the automatic Swaccha Vahini dumpsters that collect dry solid waste. But I am ready to drive a dump truck to collect waste in our village with nine other women from our group,” said Gopini Giddammanavar.

Chalagere, where she lives, had recently signed a memorandum of understanding with the Sanjeevini Self Help Group (SHG) to oversee all dry waste management in the gram panchayat.

The Wheels of Independence

The Sanjeevini SHG, formed under the National Rural Livelihood Mission (NRLM) and registered under the state cooperative law, has an average of 10 to 20 female members who receive livelihood training and financial assistance through NRLM and Karnataka State Rural Livelihood Promotion Society (KSRLPS). Haveri district has 6,183 SHG Sanjeevini and Karnataka has 1,81,931 in total.

Gopini admitted that driving an automatic dumpster is difficult in rural areas, but she wanted to try something new, and it was a good opportunity. “I will never hesitate to drive Swaccha Vahini and pick up dry waste even though I am a graduate; I am proud of this work,” she beamed.

This is not just the story of Gopini, but of the 32 women who have been trained at the Bank of Baroda Self-Employment Training Institute (RSETI) in Haveri to lead the Swaccha Vahini in different gram panchayats . Among them, three women are graduates and hold part-time jobs as teachers. The others have completed their SSLC. The group has completed its month-long training and is ready to be part of Haveri Zilla Panchayat’s pilot program to employ female drivers.

“The first batch of one-month driving training with food and accommodation for women has been successfully completed. Apart from driving, we also trained them in life skills and banking. They will be well equipped to be self-sufficient after this training,” said RSETI Director Shajit S.

One of the trainers told 101Reporters: “In addition to the driving lessons, we also explained to them the main parts of the vehicles and taught them minor mechanical repair techniques. They participated enthusiastically and each female trainee drove a vehicle for 6 km per day. They can operate automatic tippers without any problem in rural areas.

The Zilla Panchayat plans to launch a second batch of female driver training through RSETI. Previously, women only picked up and sorted dry waste such as paper, cardboard, glass, plastic, fabric and metal, and it was the men who drove the automatic dumpsters. Dependence on male drivers will decrease significantly once more female drivers complete their training. No less than 109 grams of panchayats (out of 223 in Haveri) were given automatic dumpsters worth Rs 6 crore under the Swacch Bharath mission, and newly trained female drivers will drive these vehicles.

When contacted, Mohammad Roshan, the general manager of the Haveri Zilla Panchayat, explained that the women between the ages of 18 and 45 had completed their driver training and would be granted a light motor vehicle driver’s license after the prescribed period. “These 32 drivers will use Swaccha Vahini dumpsters in their respective villages to collect dry waste door-to-door and dispose of it in solid waste management units,” he told 101Reporters.

The CEO also said that they have planned to set up solid waste management units in 170 gram panchayats. “We will employ the services of local women members of self-help groups to run the units. They will manage everything – from collecting dry garbage from each household, to producing manure from the waste, selling it, and driving automatic dumpsters. The initiative will help women become financially independent,” Roshan stressed.

Currently, most gram panchayats implement waste management in open spaces and do not follow scientific methods of segregating and recycling garbage, affecting the health of people in surrounding places and causing severe distress to the environment. Additionally, waste management staff do not have a protocol in place to manage the process. Cattle and other animals end up ingesting harmful waste, which also affects their health.

Tumminakatti gram panchayat in Ranebennur taluk has recently started using waste management units and is getting a good reception from the public. They collect dry household waste and separate it for recycling. They also built an ecological park in the village from recycled materials.

The gram panchayat provides the vehicles and waste management units, and Sanjeevini’s team has no investment to make. The team will eventually pay salaries using revenue from the sale of recycled waste.

Satish Ilager, a member of the gram panchayat of Agadi, believed that women could only drive light motor vehicles and that the use of automatic dumpsters for the collection of dry waste in rural areas would prove difficult. Many drivers in these areas do not follow driving rules. Also, most of the rural roads are pathetic, especially the inland trails, which are very narrow. Another major concern for sanitation workers is that they are looked down upon because of their choice of profession. However, the villagers are curious about them and want to see how they manage the solid waste management unit, including driving a vehicle themselves.

At first, even family members were reluctant to allow their wives to take driving lessons and work in waste disposal, but Zilla and gram panchayat officials convinced them. The drivers will soon start working. Meanwhile, the Zilla panchayat has scheduled one to two day training at each gram panchayat level to boost women’s morale and confidence.

“We are confident that they could manage the whole solid waste management unit in our gram panchayat including the conduct of Swaccha Vahini themselves. They are showing great commitment, which will reduce reliance on male drivers, and solid waste management will be a smooth process,” said Venkatesh Ukkadagatri, Panchayat Development Officer (PDO) Chalagere gram panchayat at Ranebennur taluk.

The female drivers agree with the AOP, are confident in their driving skills and reiterate that they could handle large vehicles just like their male counterparts.

“We are not worried about driving automatic dumpsters for dry waste disposal in villages because we do not drive fast and avoid reckless driving. Also, we only need to drive a maximum of 6-8 km per day, so it’s very easy for us. The only problem is that people in rural areas consider us inferior to them because of our work. However, we try not to be affected by this. We believe that work is a cult and many public servants have great respect for us. We know it is a noble job because we contribute to our environment,” said Nirmala Harijan, a dump truck driver from Chillurbadni of Savanur taluk.

(The author is a freelance journalist based in Karnataka and a member of 101reporters, a pan-India network of local journalists)

Legal disclaimer: MENAFN provides the information “as is” without warranty of any kind. We assume no responsibility for the accuracy, content, images, videos, licensing, completeness, legality or reliability of any information in this article. If you have any complaints or copyright issues related to this article, please contact the provider above.